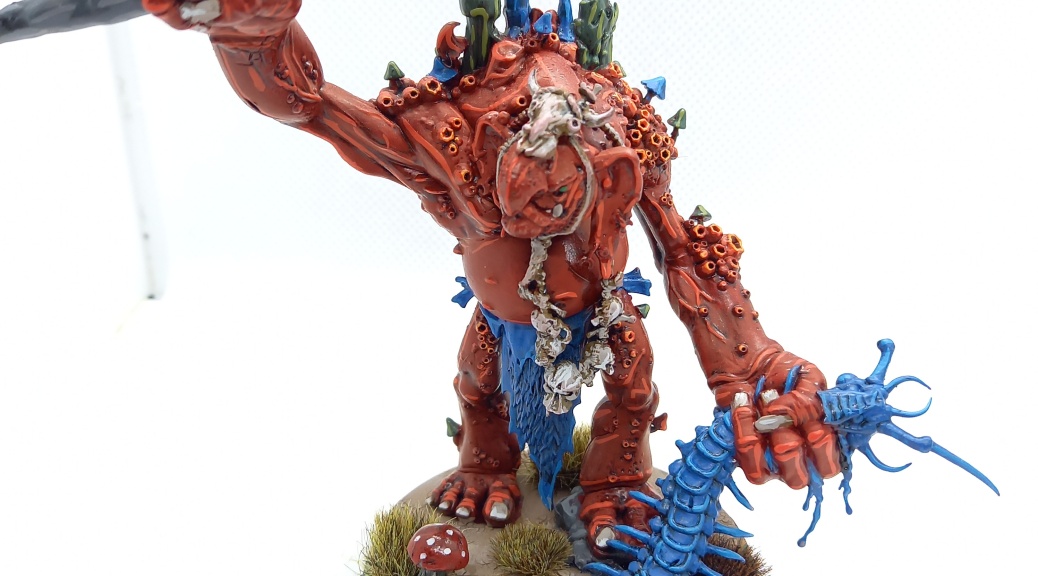 So Peter asked a group of us to join him for a Path to Glory campaign which has been improved in AOS3 to be more like the Crusade system which is now in use by 40k.

Despite being a Gloomspite fan, I am struggling with using them in tournaments at the moment having gone 0-3 at a local tournament with Squigs – and being lucky to have got zero! There’s a few too many Gods (and Gotrek’s) in the tournament scene for me to enjoy the Gloomspite.

So, Path to Glory provided a perfect opportunity – and a bonus excuse to finish off my Troggoth army which Trogg (Stuart Hodges) has been bugging me to do for a while. I have a Dankhold Troggboss, 9 Fellwaters and 6 Rockguts already painted so a Warband size (1,000 points) would be a perfect starting point.

Going through the Core Book for Age of Sigmar 3 (pp 304), I found what I needed to do and that a Warband size allowed me one Starting Territory. As Troggoths have very expensive heroes, I decided to take ‘Small Settlement’ which would allow me to Reinforce an additional unit. I wouldn’t use it immediately but 6 or 9 Troggoths in small point games could be quite powerful.

My other choice was what to include in the armies within certain limitations (3 Heroes, 1 Wizard etc…). Fortunately the models I have made the decisions relatively easy. I couldn’t afford to have all my Troggoths so I went with 6 of each, led by a Dankhold Troggboss. To allow some playing with the magic phase (or Hand of Gork), I added a Fungoid Cave-Shaman.

Turning to page 308 of the Core Book I found I needed a Warlord – that was easy, it had to be the Dankhold Troggboss.

He would be my general in any games I play with him in the force. I also at this point took the opportunity to try out the Sub-Allegiance – Glogg’s Meganob from the Kragnos book which provides a little boost to healing the Troggoths. This gave me the default command ability and artefact of power from this allegiance.

Finally, I was allowed an Endless Spell and because I had a Fungoid I could even cast it. I wanted something unsubtle and Troggoth like, but with only 55 points left, Iwas limited in my choices. Looking through the options I couldn’t take any Gloomspite specific Endless spells, but Ravenak’s Gnashing Jaws were pointed at exactly 55 points. Clearly Mork had a plan so I roll with this and add them in. Is this Endless spell good – no – will it be fun – hopefully.

With that all done, I was ready to get a game organised… but I’m primarily a tournament player so that would have to wait a while, as I’m off to Mancunian Carnage this weekend with my Sons of Behemat.

4 thoughts on “Path to Glory – Troggoths”